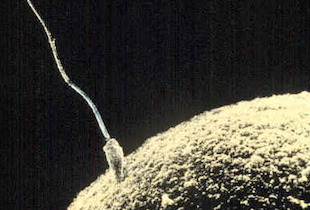 A sperm cell fertilizing an eggWIKIMEDIAScientists in Spain have found a way to coax skin fibroblasts into sperm-like gametes using a cocktail of six genes in vitro. Although the reprogrammed cells were not functional sperm, the work could help advance fertility science, researchers at the Valencian Infertility Institute (IVI) in Spain and their colleagues reported Tuesday (April 26) in Scientific Reports.

“This is the problem we want to address: to be able to create gametes in people who do not have them,” study coauthor Carlos Simon, IVI’s scientific director, told Discovery News.

Inspired by the work of Shinya Yamanaka and colleagues, who developed the technique for creating induced pluripotent stem cells (IPSCs), Simon and colleagues induced human foreskin fibroblasts and mesenchymal stem cells to differentiate into germ-like cells in vitro, using a cocktail of factors that promote expression of six germline-related genes: PRDM1, PRDM14, LIN28A,...

However, the germ cells did not fully develop into sperm cells capable of fertilizing an egg, a step that needs to be done in vivo, Popular Science reported.

Previous studies have shown that human germ cells can be derived from IPSCs in vitro. Earlier this year, scientists in China announced their creation of sperm-like cells from mouse embryonic stem cells.

The germ cells in the present study need “a further maturation phase to become a gamete,” Simon said in a statement. “This is just the beginning.”