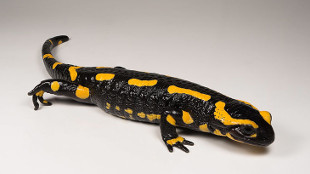 WIKIMEDIA, DIDIER DESCOUENSA close relative of the chytrid fungus Batrachochytrium dendrobatidis (Bd)—thought to have wiped out more than 200 amphibian species since the 1980s—has been found responsible for decimating the fire salamander population in the Netherlands over the past five years. The findings were published Monday (September 2) in Proceedings of the National Academy of Sciences.

The newly discovered fungus, Batrachochytrium salamandrivorans, or Bs, specifically targets salamanders. It eats through the skin, exposing the creatures to deadly bacteria and viruses. “It causes ulceration and holes in the skin and kills within just 12 days,” An Martel, a biologist at Ghent University in Belgium, told New Scientist.

Once Martel and her colleagues grasped the magnitude of the die-offs, they captured 39 surviving salamanders from affected areas in order to breed them in the lab. At one point, the lab-raised population dwindled...

Though Bd and Bs are closely related, Bs is genetically different enough from Bd that previous surveillance programs for Bd would have missed Bs, co-author Matthew Fisher, a fungal epidemiologist at Imperial College London, told New Scientist. Also, unlike Bd, it appears that the Bs fungus does not affect toads and frogs.

“Our experience with Bd has shown that fungal diseases can spread between amphibian populations across the world very quickly,” Fisher said in a statement. “We need to act urgently to determine what populations are in danger and how best to protect them.”

Martel’s team has developed a DNA-based test for Bs and encourages researchers around the world to screen amphibians for the fungus. The researchers are also trying to determine whether Bs spreads via contact, as early experiments suggest, or whether it spreads via airborne spores, as does Bd.

Treatment with voriconazole, an antifungal medication often used by humans, has shown some promise.

Matthew Niemiller, a biologist at Yale University who studies salamanders but was not involved in the work, told New Scientist that no mass die-offs have so far been observed in North America. “I imagine that in the next six months we’ll have a better picture of how widespread this fungus is, whether it’s just Europe, or more widely spread,” he said.