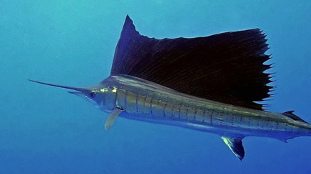 FLICKR, C. FUJITASailfish use their long, rapier-like snouts when hunting schools of smaller fish, according to a study published this week (April 23) in the Proceedings of the Royal Society B. An international team, led by Jens Krause of the Leibniz Institute of Freshwater Ecology and Inland Fisheries, used high-speed camera footage to capture and analyze the movements of hunting sailfish.

These fish often hunt in groups, sometimes up to 40, corralling schooling prey, like sardines. The purpose of the sailfish bill was not well understood, however. Although hunting sailfish have been caught on film before, the team’s study is the first systematic analysis of the fish’s hunting habits, which are more complex than previously recognized. The sailfish insert their bills into the school of fish and then slash faster than the prey fish can respond. They can also tap individual fish with their bills to disorient them,...

“They don’t just attack a school and remove individuals, like dolphins or sharks would,” Krause told the National Geographic’s Not Exactly Rocket Science. “They rough these fish up for many hours. They keep them pinned, go in, and hit multiple individuals over and over again. In smaller schools, virtually every fish has been injured many times. They’re slow and exhausted. That’s when the sailfish start with the tapping.”

Despite sailfish’s large size (averaging 9 feet to 10 feet long), they are among the fastest fish in the water, swimming up to 68 miles per hour. Paul Webb from the University of Michigan, who was not part of the work, told Nature News: “I think the sailfish have done something pretty clever in being able to get very close and then kick the crap out of their prey.”