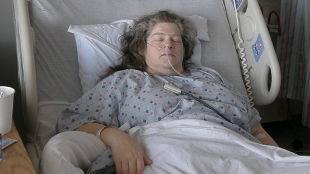 Ambien, and its generic counterpart zolpidem, have long been used to help sleepless people get a good night’s rest. But over the past 12 years, anecdotal reports have suggested the drugs may serve another purpose—reviving minimally conscious coma patients.

The first report was almost too amazing to believe, and as such, didn’t receive the credence that maybe it should have. In 1999, Louis Viljoen was hit by a truck and declared vegetative, kept alive by machines for three years before his doctor prescribed him zolpidem thinking it might stop him from clawing his mattress in the middle of the night. Twenty minutes after receiving his first dose, he woke up and started talking to his mother. He floated in and out of consciousness over the next several days, waking up for increasingly long periods after receiving his zolpidem until he stayed awake without the drug.

Now, the question is how drugs like zolpidem are working in the brain to revive minimally conscious patients. While side effects of the drug include cases of extreme sleepwalking activity, such as eating, talking, and even driving in one’s sleep, how it triggers these behaviors is unclear, as is how a sleep aid might trigger brain activity in patients that can’t seem to wake up.