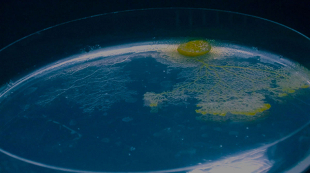 The yellow slime mold Physarum polycephalum exploring an agar plate. Courtesy of Audrey DussutourThe slime mold Physarum polycephalum remembers where it’s been, allowing the single-cell amoeboid to more efficiently navigate its environment. The key, according to a study published yesterday (October 8) in Proceedings of the National Academy of Sciences, a kind of externalized spatial memory system, based on the trail of translucent slime it leaves in its wake, that allows the organism to recognize and avoid already-explored areas.

“It doesn’t have a brain. It doesn’t even have a neuron. It has to do everything with just one cell,” Audrey Dussutour, a collective behavior specialist at France’s National Center for Scientific Research, told Wired Science. “The easiest way to have a memory of where you’ve been is to leave something behind.”

When Dussutour and her colleagues noticed that foraging P. polycephalum do not often cross earlier paths,...

The team then challenged the slime mold using a U-shaped trap, commonly used to test the navigation skills of autonomous robots. The slime molds were placed at the mouth of an impassable U, beyond which lay a chemoattractive food, to which the slime mold is naturally drawn. The researchers tested P. polycephalum on blank agar and agar containing slime that masked the test subjects own slime trail. Those on the slime-covered agar were unable to differentiate between their new trails and the slime already on the agar, making it difficult to keep track of where they had been before. As a result, it took significantly longer to reach the food, if they found it at all, spending about 10 times as much time re-exploring areas they had already been.

“It’s very simple, but it works exactly like a memory of a place you’ve been,” Dussutour told Wired. “It’s very difficult for robots to solve what the slime molds did.”

Never before been reported in organisms lacking a central nervous system, this type of external spatial memory may be “the first step toward the evolution of memory in organisms with more sophisticated neurological capabilities,” the authors wrote.