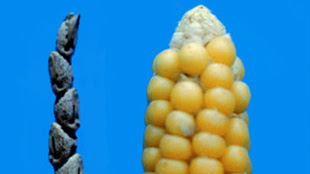 The natural ancestor of corn, a wild grass called teosinte, would have been much more difficult to eat than the crop we know and love today. For one thing, its kernels are encased by a hard outer shell inedible by humans. That hurdle, however, may not have been difficult for ancient plant breeders to overcome. According to a study published today (July 13) in Genetics, just a single DNA base substitution gave corn its soft, fibrous exterior.

“Humans completely reshaped the ancestor of corn, effectively turning the cob inside out. Our results show that a small genetic change has had a big effect on this remarkable transformation,” study coauthor John Doebley, a plant geneticist at the University of Wisconsin–Madison, said in a statement. Studies done over the last few decades indicated that transforming the single stalk of tough kernels with no central cob into the corn...

Doebley and his colleagues at Wisconsin–Madison and DuPont Pioneer compared the tga1 sequences from 16 teosinte and 20 corn varieties and found that one nucleotide replacement (C to G) converted a lysine to an asparagine in the gene’s protein product. The corn version of the protein was also more prone to forming dimers that repressed their gene targets, whereas the teosinte version was more likely to activate its targets.

“This result begins to unravel a potential cascade of gene expression changes that accompanies the alteration of a major domestication gene,” the researchers wrote in their paper.