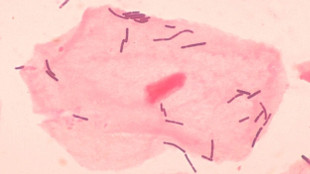 The microbes that inhabit the human body may be an untapped source of antibiotics and other drug molecules, according to an analysis published last week (September 11) in Cell. A team of researchers has mined data from the Human Microbiome Project for clusters of genes involved in the synthesis of small molecule natural products.

Using a machine-learning approach, the researchers first trained a software program on 732 known gene clusters for the synthesis of natural products. They applied this program to sequence data from the Human Microbiome Project—more than 2,000 genomes from bacteria found at five body sites on 242 people. This yielded a database of 3,118 gene clusters that were widely present in healthy people.

Because the throngs of bacteria in the body engage in a constant contest, the human microbiome is a logical source of antibiotics, according...

To demonstrate the applicability of their findings, the researchers purified and tested a thiopeptide antibiotic, dubbed lactocillin, from Lactobacillus gasseri, a common species in the vagina. Lactocillin successfully killed a range of Gram-positive pathogens, including Staphylococcus aureus, a frequent cause of skin infections.

Beyond antibiotics, if small molecules made by bacteria modulate immunity or metabolism, these could be co-opted as drugs. “We used to think that drugs were discovered by drug companies and prescribed by a physician and then they get to you,” study author Michael Fischbach of the University of California, San Francisco, told Nature. “What we’ve found here is that bacteria that live on and inside of humans are doing an end-run around that process; they make drugs right on your body.”