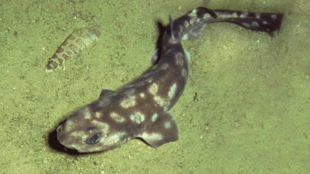 Sharks with brown skin with pale spots and the size of a typical housecat are trolling the deep waters surrounding the Galapagos Islands, scientists have learned. Measuring just 1.3 feet long, the newly discovered species belongs to the catshark, or dogfish, family—one of the largest shark families, Wired Science reported.

Named Bythaelurus giddingsi, and possibly Galapagos Catshark as its common name (to be determined), the new species was found during two submersible treks to depths of 1,400 to 1,900 feet around the Galapagos, which collected seven specimens that were then examined by researchers at the California Academy of Sciences in San Francisco. The species was described earlier this week (March 5) in Zootaxa.

“The discovery of a new shark species is always interesting, particularly at this time when sharks are facing such incredible human pressure,” John McCosker of the California Academy...