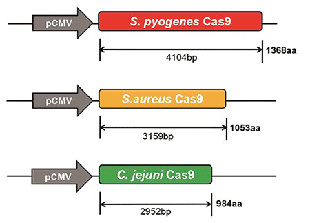 Comparison of Cas9 “gene scissors” from different bacteria: Streptococcus pyogenes, Staphylococcus aureus, and Campylobacter jejuni.INSTITUTE FOR BASIC SCIENCEAn ortholog to Streptococcus pyogenes Cas9 (SpCas9), Campylobacter jejuni Cas9 (CjCas9) is composed of just 984 amino-acid residues, making it the smallest such RNA-guided endonuclease characterized to date, according to researchers at the Institute for Basic Science in Seoul, who published their findings in Nature Communications this week (February 22).

The researchers packaged CRISPR-CjCas9 into an adeno-associated viral (AAV) vector, which they then injected into the muscles and eyes of mice. To demonstrate CjCas9’s capabilities, they used the system to modify a mouse gene linked to blindness. “CjCas9 is highly specific and does not cause off-target mutations in the genome,” coauthor Jin-Soo Kim of the Institute for Basic Science said in a statement.

“The researchers noted that CjCas9 designed to target six different DNA regions cleaved between one and...

The specificity of CjCas9could have clinical implications, the authors wrote. In their paper, Kim and colleagues proposed that “in vivo genome editing with CjCas9 is a new option for the treatment of age-related macular degeneration.”