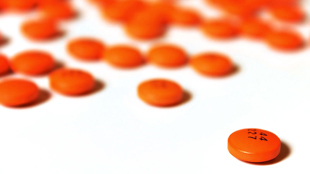 A California company has teamed up with a British pharmacy chain to sell “sensor-enabled tablets” which track when patients take their medications and how they respond to them. The collaboration, announced last Friday (January 13), will bring the pills to market in the United Kingdom by the end of the year, the Independent reported.

Proteus Biomedical designed the ingestible sensors, smaller than a grain of sand, which are activated by stomach acids after being swallowed. The sensors release copper and magnesium into the body (see how the new technology works), which is then detected by a patch that attaches like a bandage to the patient’s skin, taking a digital timestamp of when the pill was digested.

“The most important and basic thing we can monitor is the actual physical use of the medicine,” Andrew Thompson, chief executive of Proteus, told Nature. The sensor also relays...

It is not the first ingestible sensor, Nature noted. In the past, such sensors have been used to measure astronauts’ and athletes’ core temperatures. Scientists have also made cameras in pills to image the digestive system internally.