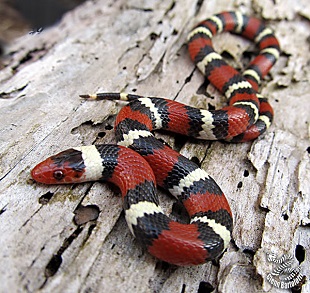 WIKIMEDIA, GLENN BARTOLOTTI Scarlet kingsnakes (Lampropeltis elapsoides), nonpoisonous snakes that are common throughout the American Southeast, mimic a species that’s been extinct for more than 50 years, according to a study published this week (June 11) in Biology Letters. Christopher Akcali and David Pfennig of the University of North Carolina, Chapel Hill, study how mimicry evolves in animals and were surprised to find that scarlet kingsnakes’ mimicry of the poisonous coral snake became better since the poisonous snake disappeared from the Carolina Sandhills region during the 1960s.

Mimicking a nonexistent snake should not confer any advantage, so Akcali and Pfennig expected that in the intervening years, which represent about 15 to 20 snake generations, the copycat pattern should have deteriorated instead of becoming more pronounced.

“This selection continues to act, even after the coral snakes have gone completely extinct,” Pfennig told Live Science, “presumably because there have not been enough generations of predators to cause a reversal in the avoidance of things that look like coral snakes, and because the fitness consequences to the predators of avoiding coral snakes—and, therefore, also their precise mimics—has been historically strong."

Eventually, the mimicry will break down, Akcali and Pfennig said. At some point, perhaps during a drought when prey are in short supply, predators will act as if there are no coral snakes and begin to attack scarlet kingsnakes.

But Tom Sherratt, an evolutionary biologist at Carleton University in Ottawa, Canada, doubts that scarlet kingsnakes’ mimicry will cease. “Many of the predators—especially avian ones—are mobile and may visit locations where the model is present, which might explain why selection for mimicry still lingers,” he told Nature News.