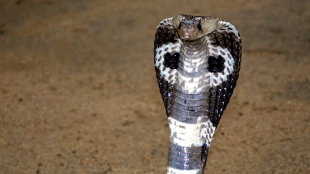 The Indian, or spectacled, cobra (Naja naja)WIKIMEDIA, JULIE ANNE WORKMANKnowing the species of snake that bit someone is essential for proper treatment. And that knowledge becomes all the more important when the offending serpent is venomous: administering the correct antivenom can mean the difference between life and death. Researchers working in Nepal, where people are often bitten by the deadly spectacled cobra (Naja naja), have developed a DNA test that can identify the species of snake responsible for a bite using remnant genetic material left inside fang marks on the victim. “You need to know the species that bit your patient [in order to treat them],” Ulrich Kuch, the developer of the test and a biologist at the Goethe University Institute of Occupational, Social and Environmental Medicine in Germany, told LiveScience. “Now, with the DNA-based test, we can substantially increase the number of...

Kuch and his colleagues collected 194 reptile DNA samples from Nepalese snakebite victims, 21 of whom brought in the dead snake that had bitten them. In all 21 of those cases, Kuch’s DNA test correctly identified the species of snake. The researchers reported their findings today (November 4) at the American Society of Tropical Medicine and Hygiene's annual meeting being held in New Orleans.

In its current form, the test is too slow and cumbersome to help every snakebite victim. But it could be used by epidemiologists wishing to characterize which species of snake that commonly bite people around the world. Further refinement of the test could also lead to rapid diagnostics, such as a blood test—which Kuch and his colleagues are currently working on—to quickly determine snake species from bites alone.