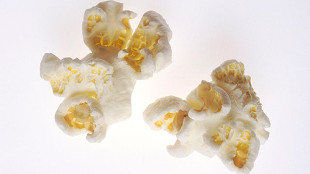 When popcorn pops, it displays similarities both to explosively flowering plants and to animal muscles, according to a study published this week (February 11) in the Journal of the Royal Society Interface. High-speed video stills captured by a pair of researchers in France revealed that popping begins with the sprouting of a starchy “leg” that causes the kernel to jump when it comes in contact with a hot pan. The popping noise, the researchers explained, is likely caused by the release of water vapor.

Capturing images of popping kernels at 2,900 frames per second enabled the team to observe the speedy transition from kernel to fluffy flake. Once the kernel begins to fracture, the “leg” forms within 14 milliseconds (ms) and the popcorn jumps 6 ms later.

“The popcorn dynamic is twofold: the popping relies on a fracture as for explosive plants, while the...

The scientists also determined the ideal temperature for popping by heating kernels in an oven for five minutes while raising the temperature in 10°C (18°F) increments. They found that only 34 percent of kernels popped at 170°C (338°F), while 96 percent transformed at 180°C (356°F). At that temperature, the pressure inside the kernel is 10 times stronger than atmospheric pressure at sea level, causing the kernel to fracture and pop.