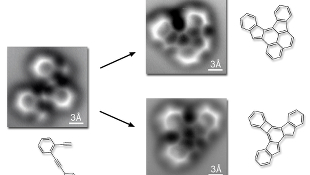 A molecule containing carbon atoms imaged before (left) and after a heat-induced chemical reaction, with the two most common reactant products (right)LAWRENCE BERKELEY NATIONAL LABORATORY AND UNIVERSITY OF CALIFORNIA, BERKELEYScientists have captured images of individual atoms being rearranged within a molecule during a chemical reaction, reported Wired Science—and the snapshots resemble a slightly blurry version of the stick diagrams used in chemistry textbooks. The work was published last week (May 30) in Science.

“Even though I use these molecules on a day-to-day basis, actually being able to see these pictures blew me away,” said lead author Felix Fischer of the University of California, Berkeley, in a press release. “This was what my teachers used to say that you would never be able to actually see, and now we have it here.”

Researchers have previously had to infer information about how a molecule’s structure changes during...

Fischer teamed up with UC Berkeley colleague Michael Crommie to use noncontact atomic force microscopy—in which a very fine point records electrical forces at the surface of molecules—to take snapshots of individual carbon-containing molecules as they reconfigured their atomic structure in response to heat. The resulting images not only clearly showed the carbon atoms, but also the individual electron bonds between them. (For more on atomic force microscopy, see our recent story “Structure by Feel.”)

“The atomic force microscope gives us new information about the chemical bond, which is incredibly useful for understanding how different molecular structures connect up and how you can convert from one shape into another shape,” said Crommie in the press release. “This should help us to create new engineered nanostructures, such as bonded networks of atoms that have a particular shape and structure for use in electronic devices. This points the way forward.”