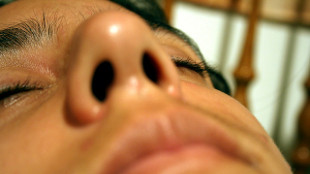 While the body rests, the brain continues to work: research indicates that the sleeping brain consolidates memories and can even form new associations. Now, a study suggests that associations formed during sleep can lead to long-term changes in behavior—specifically, the number of cigarettes one smokes.

Sleeping smokers who were exposed to the smell of cigarette smoke followed seconds later by the smell of fish or rotten eggs smoked 30 percent fewer cigarettes during the week after the sleep test than the week before, scientists at the Weizmann Institute of Science in Israel reported this week (November 12) in The Journal of Neuroscience.

The researchers did not observe this effect in smokers who were exposed to the smells while awake, or in those who experienced the smells at separate times during sleep.

This type of olfactory conditioning holds potential as a treatment for addiction, particularly because the...

“We have not yet invented a way to quit smoking as you sleep. That will require a different kind of study, altogether,” Arzi said in a press release. “What we have shown is that conditioning can take place during sleep, and this conditioning can lead to real behavioral changes. Our sense of smell may be an entryway to our sleeping brain that may, in the future, help us to change addictive or harmful behavior.”