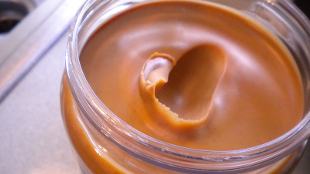 FLICKR, DENISE KREBSIn a small pilot study of patients displaying signs of cognitive decline, researchers at the McKnight Brain Institute Center for Smell and Taste and the University of Florida (UF) found that peanut butter can help identify those with Alzheimer’s disease (AD), a neurodegenerative disorder often accompanied by a loss of smell.

Working with 18 patients with probable AD, 24 with mild cognitive impairment, 26 with other causes of dementia, and 26 matched controls, graduate student Jennifer Stamps and her UF advisor Kenneth Heilman measured the distance from the nose at which a patient (whose eyes were closed) could smell a tablespoon of peanut butter. They ran the test one nostril at a time and found that early-stage AD patients had dramatically different smell sensitivity between the right and left nostrils, with the left regularly being more severely impaired. The other patients tested displayed no such difference in...

“Portions of olfactory cortex are the initial sites of AD pathology, and patients with AD often have more degeneration of their left than right hemisphere,” the authors wrote in their report, published this month in the Journal of Neurological Sciences. “This non-invasive and inexpensive left–right nostril odor detection test appears to be a sensitive and specific test for probable AD.”

Of course, more research is needed to validate the approach, Stamp said. “At the moment, we can use this test to confirm diagnosis, but we plan to study patients with mild cognitive impairment to see if this test might be used to predict which patients are going to get Alzheimer’s disease,” she said in a statement.

Read this month’s feature story, “Smell and the Degenerating Brain,” written by Richard Doty of the Smell and Taste Center at the University of Pennsylvania’s Perelman School of Medicine, for a deeper look at the link between smell and neurodegeneration—and how smell tests might be a useful diagnostic tool.