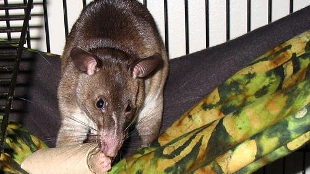 African pouched rat, WikimediaThe Belgian NGO Apopo is on the hunt for the life-threatening bacterium that causes tuberculosis (TB), and it is finding it using an unlikely helper—the African giant pouched rat, so named for its paunchy cheek pouches. After a bit of training, the rats can identify a distinctive TB smell—caused by organic compounds the bacterium produces in infected samples—in a fraction of a second, tackling as many as 1,680 samples per day, The Hindu reported. To put that in perspective, a trained lab tech can screen about 40 samples per day, a number that takes a pouched rat just 7 minutes.

The organization has been using the rats as a secondary screening method in hospitals, screening more than 97,000 samples and upping detection rates by as much as 23 percent. The success of the project caught the attention of the Mozambique government, which has asked Apopo to...

The projects add to the growing number of animals being used to detect disease. Dogs, for example, are being trained to identify and even differentiate among a variety of human cancers. Bees have also showed promising abilities in recognizing TB volatiles.

And the applications for such impressive sniffers aren’t limited to medicine. Apopo is also teaching pouched rats to detect landmines, for example. “We have 40 rats in mining operations in Mozambique,” Tewelde told The Hindu. “So far we have returned over 5.5 million square metres of land to local population and have detected 2,500 mines, 2,200 unexploded ordinances and over 12,500 small arms ammunitions in Mozambique. In 30 minutes, our rats can cover an area that can take a fast [human] de-miner over two days.”