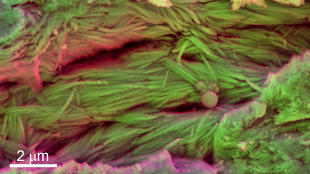 Scanning electron micrograph of samples extracted from ribs of an indeterminate dinosaur displaying mineralized collagen fibresIMAGE: SERGIO BERTAZZOScientists in the U.K. have recorded images suggesting the preservation of soft tissues, including red blood cells and collagen fibers, in fossilized dinosaur bones that date back 75 million years. Publishing their findings in Nature Communications today (June 9), a team led by researchers at Imperial College London, suggested that such well-preserved specimens of soft tissues may be more common than previously thought, even in millennia-old fossils. “We have several indications that the structures we found are consistent with red blood cells and collagen,” study coauthor Sergio Bertazzo of Imperial College told The Verge. “We were not expecting to find what we found at all. So for us, every single discovery was quite exciting.”

The researchers did not find evidence of intact genetic material, however, and the chance of recovering...

The team scanned eight dinosaur bones from the Cretaceous period—from 145 million to 66 million years ago—that were unearthed in Canada and housed at the Natural History Museum in London for more than a century. The team used nano-analytical techniques, such as time-of-flight secondary ion mass spectrometry (ToF-SIMS), to identify amino acid fragments characteristic of collagen fibrils, plus other techniques to image what appeared to be blood cells in the claw of a therapod dinosaur.

Even though the fossils did not yield intact DNA, finding decently preserved soft tissues may open the door to myriad insights into dinosaur biology. “In ten to fifteen years we might know a lot more about dinosaurs than we ever thought possible: information about physiology and what they looked like that we could never get from the bones alone,”  Maidment told Discover’s D-brief. “Our discovery has simply shown the potential for what might be preserved if we look in the right place.”