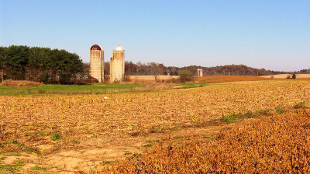 Wikimedia, Brian StansberrySoil microbes exposed to antibiotics over a long period evolve the ability to detoxify the compounds, and may even derive nutritional benefit in the process, according to a report out last week (December 6) in the Journal of Environmental Quality.

Antibiotics administered to promote the growth and health of livestock find their way into agricultural soils through the manure of the treated animals, which is used as fertilizer. To see how long-term exposure to these medicines affect bacteria in the soil, researchers set up an experiment more than a decade ago in which plots of land were dosed every year with a mixture of three common veterinary antibiotics—sulfamethazine, tylosin, and chlortetracycline.

Ten years on, the team found that sulfamethazine and tylosin were degraded much more rapidly in soils with a history of antibiotic exposure than in untreated soils, suggesting that antibiotic-degrading microbes are selected for over...

The findings led the team to propose that under the selective pressure of long-term exposure to antibiotics, microbes may evolve to not only break down the compounds, but also to use them to fuel its own growth. “I think it’s kind of a game changer in terms of how we think about our environment and antibiotic resistance,” lead study author Edward Topp of Agriculture and Agri-Food Canada in London, Ontario, said in a press release.

And although the evolution of antibiotic-eating bacteria means that drugs from agricultural wastes will not linger in the soil for long, the researchers warn that the trait could be transferred to a pathogenic microbe. “A reservoir of antibiotic resistance genes in the environment that is made larger through contamination with agricultural wastes may represent an enhanced threat to human health,” the authors wrote.