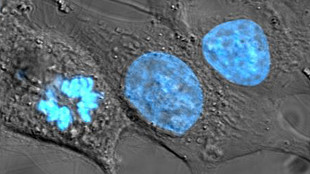 Wikimedia, TenOfAllTradesGenome sequencing usually requires the pooled DNA from thousands, if not millions, of cells, but a new method allows researchers to sequence up to 93 percent of a genome from a single cell. The technique, published yesterday (December 20) in Science, will help scientists identify cell-specific sequence variation, which could, for example, clarify how individual cancer cells become more malignant, or how neurons differ.

“[This technique] opens a door to many critical questions,” geneticist Bing Ren of the University of California, San Diego, who was not involved in the study, told Nature.

To decode the genome of a single cell, researchers developed a DNA amplification process called multiple annealing and looping-based amplification cycles (MALBAC). The method allows scientists to create the ample copies of DNA needed for sequencing without over-copying certain regions that are easy to copy—a critical pitfall in sequencing small amounts of DNA. The...

Although the method isn’t error proof, researchers expect it will be widely adopted. “I think people are going to start using it right away,” James Eberwine, who works on single-cell genetics at the Perelman School of Medicine at the University of Pennsylvania and was not involved in the study, told Nature.