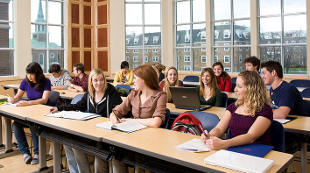 WIKIMEDIA, STFXIn Asian, eastern and southern European, and Middle Eastern countries, teenage girls perform better, on average, than teenage boys on a test for science comprehension. But in the United States and a handful of other countries, particularly those in western and northern Europe and the Americas, the reverse was true, The New York Times reported.

The test, administered by the Organization for Economic Cooperation and Development and given in 65 developed countries, points to culture differences in the incentives offered for learning math and science, project lead Andreas Schleicher told The Times. In the U.S., he said, boys are more likely than girls to “see science as something that affects their life.”

Christianne Corbett, a senior researcher at the American Association of University Women, agreed, saying, “we see that very early in childhood—around age 4—gender roles in occupations appear to be formed. Women are less likely to...

In contrast, Schleicher said, “for girls in some Arab countries”—such as Jordan, where girls outscored boys by an impressive 8 percent—“education is the only way to move up the social structure. It is one way to earn social mobility.”