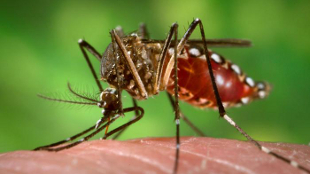 WIKIMEDIA, US DEPT. OF HEALTH AND HUMAN SERVICESJust a few hours after their first exposure to the insect repellent DEET, the chemical no longer repels some mosquitoes because they can ignore its noxious smell, according to a report published yesterday (February 20) in PLOS ONE.

Developed by the United States military following its experience of jungle warfare during World War II, DEET (N,N-Diethyl-m-toluamide) is the most widely used active ingredient in insect repellents. It has been shown to be very effective, but recent studies have suggested that some Aedes aegypti mosquitoes—the species that spreads dengue and malaria—are not put off by its presence.

To understand how, researchers from the London School of Hygiene and Tropical Medicine attached electrodes to the antennas of female A. aegypti as the insects sought to feed on a human arm covered in DEET. Three hours after the chemical repelled...

“There is something about being exposed to the chemical that first time that changes their olfactory system—changes their sense of smell—and their ability to smell DEET, which makes it less effective,” coauthor James Logan told BBC News.