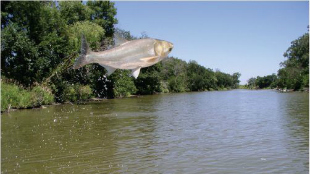 USGS, R. NELSONThe Cumberland River in western Kentucky has been a grisly scene recently. In just one day last week, a massive fish die-off claimed about 500,000 silver carp, an invasive species native to Asia. Mysteriously, this species alone appears to have been affected in what officials are calling the largest fish kill to hit Asian carp in the U.S.

“Whenever there is one species of fish, you are definitely thinking viral or bacterial,” Paul Rister, a biologist with Kentucky Department of Fish & Wildlife Resources, said in a press release. “It’s not anything water quality wise. If it was oxygen-related or chemical related you would see other species. Primarily what we are seeing below Barkley Dam is all Asian carp.”

Silver carp—known for their spectacular jumping performances—are a menace to many lakes and rivers in the U.S. They crowd out native species and take over ecosystems....

A pathogen specific to Asian carp could offer one way to combat the problem. “It’d be nice for them to be able to isolate that and create a biological bullet to combat Asian carp,” Brooks said. It appears that the fish kill is petering out, but Brooks said in a statement that “it’s comforting to know there’s something out there that might take these things out before they just devastate everything. Right now we just don’t have it.”