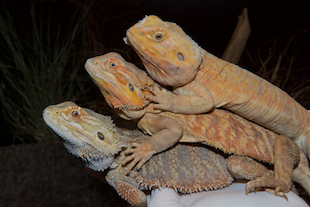 From bottom to top: Wild type, heterozygous mutant, and homozygous mutant bearded dragons© MICHEL C. MILINKOVITCHReptile scales, bird feathers, and mammal hair all developed from the same structure in a common ancestor that lived some 300 million years ago, researchers have reported. Michel Milinkovitch of the University of Geneva, Switzerland, and colleagues found evidence of placodes—small bumps of thickened skin that develop in bird and mammal embryos—in bearded dragons, Nile crocodiles, and corn snakes, the team reported last week (June 24) in Science Advances. This was the first time these structures have been spotted in reptiles.

“People were fighting about the fact that reptiles either lost it, or birds and mammals independently developed them,” Milinkovitch told The New York Times. “Now we are lucky enough to put this debate to rest.”

Milinkovitch and colleagues were studying why some bearded dragons are born without scales, after finding...

“This really closes some important questions,” Leopold Eckhart, a professor of dermatology at the Medical University of Vienna in Austria, who was not involved in the study, told Science.

The next step is to determine how the placodes in the common ancestor of reptiles, birds, and mammals led to the development of scales, feathers, and hair, respectively, evolutionary biologist Günter Wagner of Yale University told Science News.