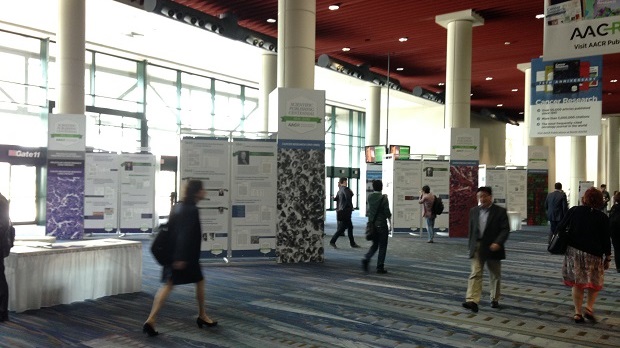 This week in New Orleans, Louisiana, tens of thousands of scientists gathered to discuss the latest and greatest in the world of cancer research. Hot topics included cancer metabolism, neoantigens (antigens specific to tumor cells), epigenetic regulators of cancer, microRNAs, and more.

We are on the cusp of a real inflection point in the fight against cancer.

—US Vice President Joe Biden, in his remarks at AACR’s final plenary session “Highlights 2016: Vision for the Future”

I fear that I am a member of an endangered species at a time when the whole ethic of doing discovery-oriented research is being marginalized. . . . I hope that one day this trend will reverse itself.

I expect over the next decades we will see a very large expansion...

—Phillip Sharp, MIT, in his opening comments at an AACR symposium on the roles of noncoding RNAs in cancer

The main message is that cancer immune-oncology is living up to its promise. Steady increase in durable remissions reported by a variety of groups. The main clinical challenge is how to efficiently conduct combination trials with other targeted agents, since preclinical models are pretty useless in predicting.

—Carl June, University of Pennsylvania Perelman School of Medicine, in his talk at an AACR session on CAR T-cell therapy

So this suggests, contrary to what’s in every textbook, that our cells are capable of using extracellular proteins as a meaningful source of nutrients.

The current understanding of what causes cancer focuses on the function of individual genes. . . . What’s missing in this picture is any discussion of aneuploidy.

—Stephen Elledge, Harvard Medical School, in his AACR talk on aneuploidy and cancer

Data has been no more democratic than it is now. Take advantage of it to propel your own science.

—Nancy Davidson, University of Pittsburgh Medical Center and incoming AACR president, in her talk on advice to young scientists

This is personal for us. . . . Our son Beau, my mother, my father. But it’s also bigger than us. It affects millions of people around the world, every day.

—US Second Lady Jill Biden in her remarks at AACR’s final plenary session “Highlights 2016: Vision for the Future”