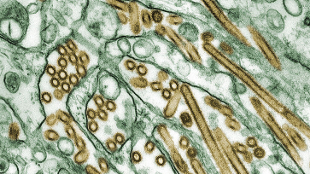 Colorized transmission electron micrograph of Avian influenza A H5N1 viruses (seen in gold) grown in MDCK cells (seen in green). Wikimedia, CDC, Cynthia GoldsmithLast week (November 27), the National Institutes of Health (NIH) announced a proposal that would require that some grant applications involving the H5N1 avian influenza virus—which became the source of much debate earlier this year when researchers evolved the deadly virus to be transmissible between mammals—undergo additional department-wide or government-wide review. The draft plan also indicates that it might be appropriate to keep the work secret, ScienceInsider reported.

It "attempts to set forth a conceptual framework for how we might approach, at least within HHS [the Department of Health and Human Services] . . . decisions about what we would be willing to fund or not fund," associate NIH director for science policy Amy Patterson told a meeting of the National Science Advisory Board for...

But not everyone is happy with the proposal as it stands. It has been “very controversial” within the committee that developed it, Patterson said.

The plan “is going to raise a lot of questions and concerns among researchers,” University of Louisville microbiologist and biosecurity policy expert Ron Atlas told ScienceInsider. Some call the plan “misguided;” others worry that it may make it difficult, if not impossible, to get funding for studies covered by the new proposal. “My read of this is that it really would put a stop . . .  to most of this research,” new NSABB Chair Samuel Stanley told ScienceInsider. “I think it sets a bar that may be too high in my opinion to allow you to do any gain-of-function [experiments],” which could result in mutations that cause greater virulence and transmissibility, but can lead to important insights into viral evolution and spread. “While I certainly appreciate the risks, . . . they are very powerful tools when used appropriately.”

Others are supportive, arguing that it is exactly what is needed to ensure public safety by mimizing the risks of accidental release from the lab or deliberate maleficence. (For further discussion of the risks and benefits of H5N1 research and regulation, see The Scientist’s April debate, “Deliberating over Danger.”

The NIH says it will soon provide more detail in the form of a white paper, which will be available for public comment, and further discussion is expected at an H5N1 workshop the agency is holding later this month. “We definitely want to hear what other countries are thinking about this," Patterson said.