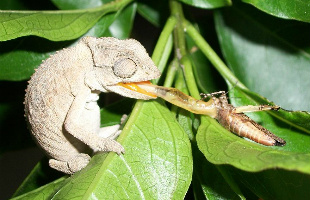 Bradypodion melanocephalum, one of the species studied, catching a grasshopper in Athlone Park, South Africa. WIKIMEDIA, M. PURVESThe smaller the chameleon, the more powerful its tongue, according to a study published yesterday (January 4) in Scientific Reports. With proportionally larger tongue apparatus, small chameleons project their mouth organs faster and further—peaking at an acceleration of 2,590 meters per second squared and a power output exceeding 14,000 watts per kilogram.

“These values represent the highest accelerations and power outputs reported for any amniote movement, highlighting the previously underestimated performance capability of the family,” study author Christopher Anderson of Brown University wrote in his paper.

Masters of camouflage, chameleons are also some of the fastest vertebrates in the world. Elastic tissue and muscle surrounding the hyoid (a tongue-anchoring bone also present in mammals and birds) help to spring-load the tongue at the back of the mouth. When released, this...

Until now, the family’s record of 486 meters per second squared (50g) came from a chameleon more than 22 cm long from snout to tail base. But following previous work showing that less-studied, smaller chameleons had proportionally larger tongue apparatus, Anderson hypothesized that the tongues of slighter species ought to be even faster.

Using high-speed video, Anderson filmed chameleons from 20 taxa projecting at a “cricket trapeze”—a cricket on a screen suspended by a thread. He found that smaller chameleons projected further (up to 2.5 body lengths) and packed more power into faster accelerating tongues.

Correction (January 6): This article has been updated to amend the units of measurement assigned to acceleration speeds listed throughout. These speeds are measured in meters per second squared (not meters per second, as was written). The Scientist regrets the error.