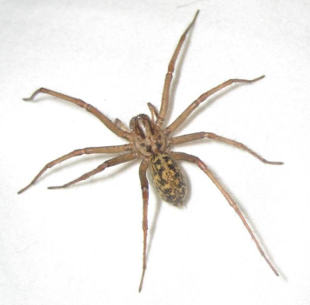 The hobo spiderWIKIMEDIA, JUDGEKINGSpiders and centipedes don’t have a whole lot in common, at least in terms of evolution. The eight-legged arachnids diverged from other arthropods, including insects, about 400 million years ago, developing structures, behaviors, and ecological niches all their own. But a team of researchers has found that at least some spider and centipede species share molecular architecture in their venom proteins thanks to convergent evolution. University of Queensland structural biologist Glenn King and his coauthors reported yesterday (June 11) in Structure that an insulin-like protein in the venom of hobo spiders (Eratigena agrestis) and some centipede species has a very similar molecular structure to the hormone from which both compounds evolved. Even though the genetic sequences of the toxins and the hormone are very different, similarity in the structure of the two pointed to a shared evolutionary history. “If you take the sequence...

Aside from the evolutionary insight into arthropod venom, the findings may point the way to better ways to control pests. “It may be that this toxin could be a very effective insecticide,” Jessica Garb, an evolutionary biologist at the University of Massachusetts, Lowell, told Science. “People have proposed they could be green insecticides.” Properties of the toxin, such as its water solubility, make it a promising insecticide candidate and, with further manipulation of its structure, King and his colleagues are exploring the protein’s potential in other agricultural or medical contexts.