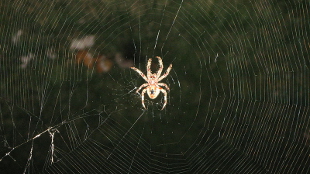 WIKIMEDIA, ANDY AND LISA REELIn the movie Spider-Man 2, released in 2004, the eponymous hero fires out a web to bring a runaway subway train to halt, saving the lives of hundreds of grateful passengers. Now, a team of graduate students from the United Kingdom has calculated that real spider silk is in fact strong enough to stop a hurtling train, reported Wired Science. The paper—called “Doing whatever a spider can”—is published in the latest volume of the University of Leicester’s Journal of Physics Special Topics, in which fourth year Masters of Physics students at the university are encouraged to tackle off-the-wall subjects.

First, they worked out that the force required to bring four New York subways cars carrying 984 people to a stop is roughly 300,000 Newtons. Then, taking into account the geometry of the front of the train and the subway passage the web would...

So, they concluded, the strength of the web portrayed in the movie is proportional to that of real spider, and it could indeed stop the subway train in its tracks. “It is often quoted that spider-webs are stronger than steel, so we thought it would be interesting to see whether this held true for Spiderman's scaled up version,” said Alex Stone, one of the students behind the study, in a press release. “Considering the subject matter we were surprised to find out that the webbing was portrayed accurately.”

Mervyn Roy, a lecturer at the University of Leicester’s Department of Physics and Astronomy, added that the task is worthwhile. “To be a research physicist—in industry or academia—you need to show some imagination, to think outside the box, and this is certainly something that [this] allows our students to practice,” he said.