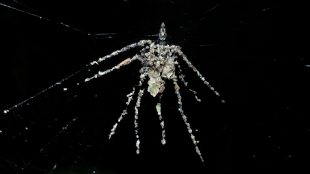 PHIL TORRESSome species of spider are known to weave elaborate patterns into their webs, but a newly discovered spider in the Peruvian Amazon tops them all—by sculpting what appears to be a giant mock spider from dead insects, leaves, and other forest debris. Believed to be a new species in the genus Cyclosa, which includes spiders known to build web structures, the 5-mm-long spider may use the decoy to confuse predators.

Biologist and science educator Phil Torres spotted the unusual behavior while leading visitors around a floodplain near Peru’s Tambopata Research Center. He contacted arachnid expert Linda Rayor of Cornell University in New York, who confirmed that the construction of spider-shaped decoys has never previously been observed. Torres later returned to same area and found around 25 more spider-building spiders within roughly one square mile.

“I have never seen a structure just like this,” William Eberhard, an entomologist...

Torres plans to return to the same area in January with a permit to collect specimens, which will help to verify whether or not the decoy builder is indeed a new species.

Clarification (December 20): Phil Torres found around 25 spiders that build into their webs structures resembling giant spiders. The Scientist has added the information and regrets the omission.