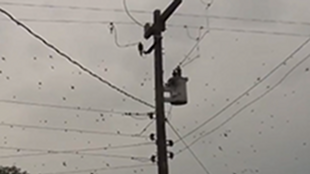 Brazilian Web site designer Erick Reis left a friend’s house last week and saw something spectacular—a giant network of spider’s webs covering the sky. Fat spiders, resting on silk hanging from power lines, seemed to float in mid-air. Rather than running away, Reis pulled out his camera and filmed the scene, launching a worldwide debate over the classification of the creatures, Wired reported.

The spider was originally identified in several news sources as Anelosimus eximius, which weave giant webs, but biologists quickly shot down this theory. “The spiders I saw in the video are not Anelosimus eximius,” Deborah Smith of University of Kansas told Wired.

She explained that the species is generally smaller than the spiders in the video and wouldn’t be expected as far south as the town of Santo Antonio da Platina, where they...

George Uetz of the University of Cincinnati, who studies the behavioral ecology of spiders, agreed with Smith’s identification, pointing out that the spiders had built a series of interconnected orb-shaped webs, rather than one large communal nest.

Forming such extensive networks of webs is normal for P. bistriata, and helps them hunt for food. “At night, they all collect in a colonial retreat, probably out of sight in a tree,” Uetz told Wired. “Then they build the colonial framework early in the day, and build individual webs upon it. They sit on these webs and capture prey.” Luckily for Reis and his friends, the spiders’ venom is not dangerous for humans.

The video, whose title translates to “Raining Spiders,” has gotten over a million views since it was first posted last week (February 7).

Correction (February 27, 2013): This story has been updated from its original version to correctly reflect that George Uetz is from the University of Cincinnati, not the University of Georgia. The Scientist regrets the error.