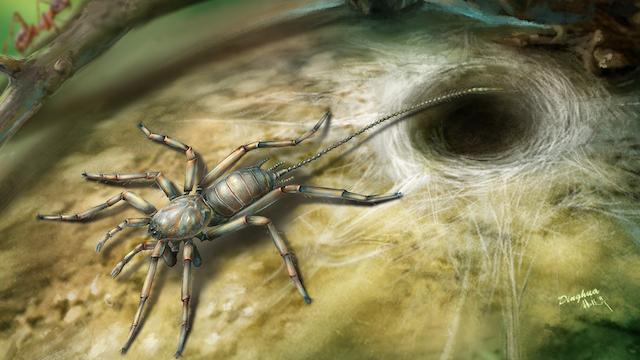 Researchers have uncovered a new species of arachnid that lived during the mid-Cretaceous age, around 100 million years ago. An international team of researchers from the United States, China, Germany, and the United Kingdom announced the discovery today (February 5) in two papers in Nature Ecology & Evolution.

“These things appear to be essentially spiders with tails!” Jason Bond, an evolutionary biologist at Auburn University in Alabama who was not involved the studies, tells Science.

The specimen, which was preserved in amber from Myanmar and closely resembles modern spiders, has a whip-like tail that is longer than its body, similar to a scorpion’s. The discovery closes a gap in the fossil record of 170 million years, the researchers report.

The team named the newly discovered arachnid Chimerarachne yingi after the mythological Chimera, a... 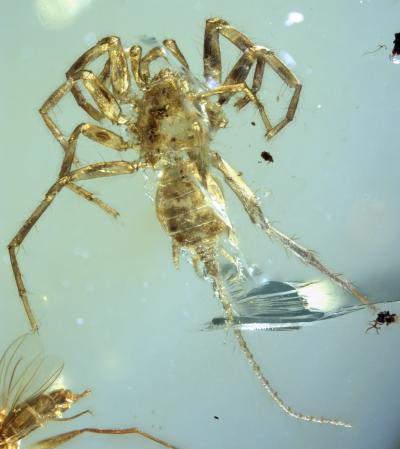 C. yingi, preserved in amberUNIVERSITY OF KANSASThe finding indicates that there was a period during which spiders’ closest relatives developed silk-producing spinnerets and reproductive organs called pedipalps while retaining long tails. The researchers write that “there must have been a continuum of character reduction and character acquisition” along the line of evolutionary development that led to modern spiders.

The tail’s function is unclear, but the researchers suspect it may have worked like a kind of antenna that the arachnid used to sense environmental cues. “Maybe the tail originally had a sensory function,” Bo Wang, a study coauthor at the Chinese Academy of Sciences in Nanjing, tells The Guardian. “[I]t is covered in short hairs, but when spiders changed to lifestyles like being sit-and-wait predators, the tail was no longer really needed and became lost.”