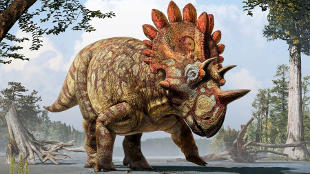 An artist's impression of Regaliceratops peterhewsiIMAGE: JULIUS T. CSOTONYI/ROYAL TYRRELL MUSEUMResearchers have unearthed an impressive dinosaur skull from a Canadian river bed. Officially called Regaliceratops peterhewsi, the new species had numerous protuberances jutting from its head, including a couple that reminded its discoverers of a certain comic book character. “There are these really stubby horns over the eyes that match up with the comic book character Hellboy,” study leader Caleb Brown, a paleontologist at the Royal Tyrrell Museum of Palaeontology in Alberta, Canada, told National Geographic. Brown and his colleague Donald Henderson published a report of the find last week (June 4) in Current Biology.

According to Brown and Henderson, R. peterhewsi—which was named after Peter Hews, the oil-and-gas geologist and amateur fossil hunter who discovered the specimen near the Oldman River in Alberta in 2005—roamed prehistoric North America about 70 million years ago....

R. peterhewsi’s bony arsenal, studding its 592-pound skull, was likely used for mating rituals rather than aggression or defense, according to Brown. “When the first horned dinosaurs were found . . . we thought these were probably used for defense,” Brown told the Calgary Herald. “You have these iconic images of Triceratops doing battle with Tyrannosaurus rex. [But] the more horned dinosaurs that we find, the less the explanation of defense makes sense. There are a number of species where their horns would be pretty much useless in defense.”

The newly analyzed fossils also suggest that there are more horned dinosaurs to be discovered. “This find tells us more about the kinds of horned dinosaurs that lived just before Triceratops was on the scene,” Andrew Farke, a curator at the Raymond M. Alf Museum of Paleontology, told Smithsonian. “I am now really curious to see what other oddities might have been around at the same time—this new beast is an important data point.”