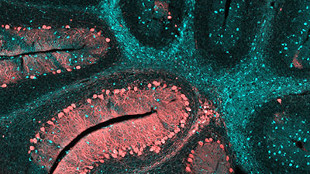 Lipid accumulation (blue) in the cerebellum of an NPC patientNICHDVtesse, a newly launched company in Gaithersburg, Maryland, will collaborate with the US National Institutes of Health (NIH) on clinical trials of cyclodextrin, a candidate therapy for Niemann-Pick Type C disease (NPC). The joint effort, announced today (January 7), represents an early success for the NIH’s National Center for Advancing Translational Sciences (NCATS), established in 2011 to accelerate the development of treatments for genetic diseases.

Cyclodextrins are rings of sugar molecules commonly used to improve the solubility of drug compounds. Vtesse now holds the license to a form of cyclodextrin shown to be safe in Phase 1 clinical trials, and plans to begin Phase 2 and 3 trials later this year to assess the drug’s efficacy at treating NPC in children. The company is also evaluating delta-tocopherol, a form of vitamin E, as a potential treatment for lyososomal...

NPC is a rare genetic condition that impairs the body’s ability to store lipids. Cholesterol accumulates in the cells’ lysosomes, wreaking havoc on the nervous system, liver, and other organs. Most children born with NPC die before they reach adulthood.

“The primary outcome here is very unusual for most NIH projects because it is not a paper or a publication; it is a license,” NCATS Director Christopher Austin told The Wall Street Journal.

Vtesse is the first spinoff company from Cydan Development, an orphan-drug accelerator that aims to de-risk development of therapies for rare and neglected diseases by supporting preclinical testing. Cydan has raised $25 million to date from a consortium of life science investors.

“This research agreement is the culmination of significant cooperation with NIH,” Vtesse president and CEO Ben Machielse said in a press release. “Going forward, we will seek input from several stakeholder groups—the patients and their caregivers, the advocacy community, academic researchers, NIH and regulatory agencies—to further develop the drug. We look forward to advancing what we believe will be a successful new treatment option.”