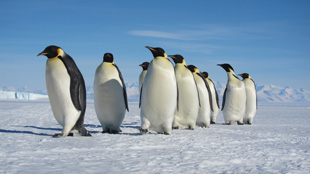 Using satellites, scientists estimated the population of emperor penguins in Antarctica and found their numbers in the icy continent were nearly twice as large as previous estimates, a new study published last week in PLoS ONE reported. A scan of Antarctica’s coastline by medium- to high-resolution satellite imagery taken during the 2009 emperor penguin breeding season revealed a total of 46 penguin colonies—some of which were found in locations never before identified. Taking into account known emperor penguin breeding rates, the scientists estimated the total population of penguins to be around 595,000.

“The results of this survey increase our knowledge of this species' population and distribution and provide a technique for long-term monitoring,” the authors, led by Phil Trathan of the British Antarctic Survey in Cambridge, UK, wrote in the PLoS ONE paper.

But despite their higher-than-expected population numbers, there should still be ample concern about the...

Read our February 2012 feature, Casting a Wide Eye, to learn about other ways researchers are using satellites to study a wide range of biological phenomena.