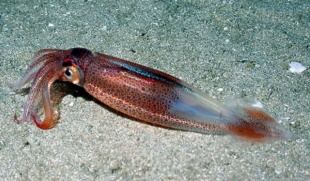 FLICKR, NOAAStretchy, fluorescent, and electric describe a new synthetic material that imitates how squid skin changes color and texture. The flexible polymer could be useful for military applications, or to create anti-fouling materials that protect ships and other surfaces from bacterial damage, its creators have suggested. The results were published this week (September 16) in Nature Communications.

Xuanhe Zhao of MIT and his colleagues created the thin elastic film, which in their paper they described as an “electro-mechano-chemically responsive system,” by drawing inspiration from cephalopod skin and muscle cells. The synthetic material responds to electrical fields and physical deformation by emitting strong fluorescent signals and forming patterns that included lines, circles, or letters. Since the material can change color, texture, or its fluorescence at the same time, it opens “promising avenues for creating flexible devices in soft/wet environments that combine [these changes] in response to a single remote signal,”...

Being able to combine a mechano-chemical response with an electrical one to induce the fluorescent patterns is significant, Zhenan Bao of Stanford University who was not involved in the study said in a press release. “Currently they can only induce one kind of pattern in each type of material,” said Bao, adding that in future work, “it will be important to be able to change the patterns.”

Similarly inspired by cephalopods, other researchers have attempted to mimic the octopus’s adaptive camouflage. These natural materials are “unprecedented in human engineering,” Zhao told The Washington Post.