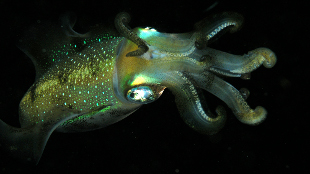 The layers of the protein reflectin that allow squid to rapidly change their skin color and blend in with their surroundings have been applied to a sticky tape that appears invisible under near-infrared light. The squid protein stickers, which could potentially shield soldiers from detection by night-vision cameras, were presented this week (March 23) at the American Chemical Society’s annual meeting held in Denver.

Iridocytes, special cells in squid skin, are composed of sheets of reflectin that display different colors depending on the spacing between the light-reflecting layers. Researchers at the University of California, Irvine, harnessed this natural property by coating bacterially expressed reflectin onto a hard surface. The scientists found that the color reflected by the protein layer depended on the thickness of the film. The surface’s color could also be altered by spraying it with vinegar vapors, which caused the previously visible layer to swell...

In the latest, more practical version of the technology, the scientists coated the protein on a pliable surface of tape that can change color when stretched. “We're going after something that's inexpensive and completely disposable,” study coauthor Alon Gorodetsky said in a statement. “You take out this protein-coated tape, you use it quickly to make an appropriate camouflage pattern on the fly, then you take it off and throw it away.”

Before the technology can be applied as a portable roll of stickers to modify nighttime uniforms, however, the researchers will have to increase its brightness and find a way to coordinate the pieces of tape so that they all reflect the correct wavelength.