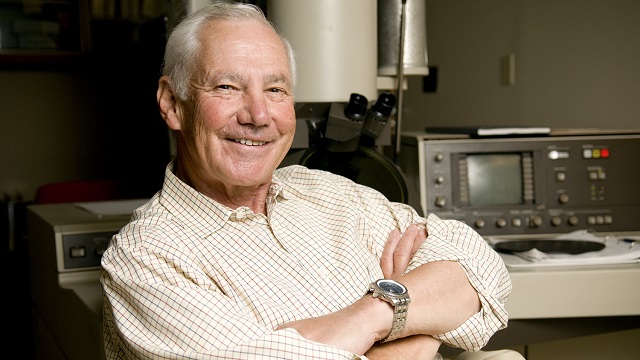 Stanford University microbiologist Stanley Falkow, famous for his work on bacterial resistance to antibiotics and known by his colleagues as the “father of molecular microbial pathogenesis,” died earlier this month. He was 84.

The American Society of Microbiology (ASM) wrote it was “saddened to learn of Stanley Falkow’s passing,” in a tweet posted Sunday (May 6). “His legacy includes both landmark microbiology discoveries and numerous scientists trained throughout the years.”

Falkow was born in 1934 in Albany, New York. In a commentary he wrote in 2008 on being selected to receive the Lasker-Koshland Award for Special Achievement in Medical Science, Falkow attributed his early inspiration in microbiology to reading Microbe Hunters—a dramatization of microbiological research written by American microbiologist Paul de Kruif—when he was 11 years old.

“The heroes of Microbe Hunters—Louis Pasteur, Robert Koch and others—became my heroes, and...

After working as a hospital bacteriologist and an autopsy assistant in the 1950s, Falkow joined Brown University graduate school in 1957, and was quickly drawn towards the emerging field of microbial genetics. During the 1960s, he worked on several studies demonstrating how bacteria could swap genetic material via circles of double-stranded DNA—the molecular structures now more commonly referred to as plasmids.

Amid stints as a researcher at the medical schools of Georgetown University and the University of Washington, Falkow demonstrated how the bacteria behind gonorrhea could acquire resistance to antibiotics via plasmid exchange, and identified a subtype of the bacterium Escherichia coli that is responsible for some types of life-threatening diarrhea prevalent in developing countries.

In 1981, he accepted the position of chairman of Stanford’s Department of Medical Microbiology. There, he focused on the mechanisms by which pathogens cause disease, and, in particular, the role of the host in infection. In 1985, he and Stanford postdoc Ralph Isberg identified a single genetic locus in the human pathogen Yersinia pseudotuberculosis that accounted for the bacterium’s ability to infect cultured animal cells.

Throughout his career, Falkow maintained a fascination with what defines a pathogen. “After 50 years of study,” he wrote in his 2008 commentary, “I concede that there is no simple definition that accounts for what a pathogen is.”

In addition to his research contributions, Falkow was known for his dedication to educating future generations of scientists. He contributed to numerous textbooks and public lecture series on microbiology, mentored more than 100 graduate students and postdocs, and was well-known for generously redirecting praise from himself toward the people he worked with.

On being awarded the 2015 National Medal of Science—an honor he called a “total surprise”—Falkow emphasized in a press release the team nature of scientific research: “I always say, ‘In science, it’s not “I,” it’s “we.”’ And it’s so true. There are hundreds of students and colleagues around the world with whom I’d like to share this honor.”

Members of the microbiology community have been taking to Twitter these past few days on learning of his death. Jeffrey Dean, head of the Department of Biochemistry, Molecular Biology, Entomology and Plant Pathology at Mississippi State University, writes that Falkow was “one of the kindest professors I met during my freshman year on campus and it was always a pleasure to chat when we bumped into each other in the halls of the old Medical Microbiology department.”

Elisabeth Bik, previously a microbiologist at Stanford and now science editor at microbial genetics company uBiome, writes: “Stanley Falkow was my professional ‘grandfather’. He has done so much to bring microbiology research @Stanford and the rest of the world to top notch level. We will miss him.”