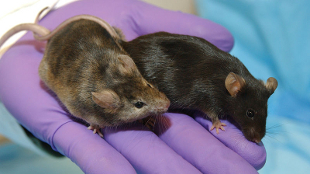 WIKIMEDIA, MAGGIE BARTLETT, NHGRIWhen Haruko Obokata of the RIKEN Center for Developmental Biology in Kobe, Japan, and her colleagues first published their new method of reprogramming cells, known as stimulus-induced acquisition of pluripotency (STAP), they claimed to have created multiple stem-cell lines from different mouse strains, although only the data on cell lines derived from the 129B6F1 strain were published in their Nature papers. A new genetic analysis provides evidence that some cell lines that were created but not published were actually derived from different mouse strains than claimed, suggesting that laboratory contamination may be at play, Nature News reported last week (March 27).

The analysis was conducted by a collaborator on the original papers with Obokata, Teruhiko Wakayama of Yamanashi University, Japan. Wakayama first admitted to having difficulty reproducing the results as questions surrounding the technique began to arise six weeks ago. He held a press conference...

“Something is grossly wrong,” stem-cell researcher Hiromitsu Nakauchi of the University of Tokyo added.

Obokata did not respond to Nature News about the analysis. Wakayama said that he has also shared 20 STAP cell lines with an independent institution for further investigation.