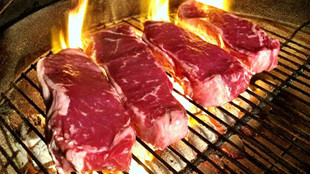 WIKIMEDIA, _BuBBy_ Studies have found associations between red meat and heart disease, but exactly why the popular foodstuff can be harmful has been unexplained. A new study published earlier this week (April 7) in Nature Medicine suggests that a molecule found in steaks called L-carnitine is at fault. Gut bacteria convert it into trimethylamine N-oxide (TMAO), a molecule linked with arterial clogging, ScienceNOW reported.

The more L-carnitine the mice and humans were used to ingesting, the more TMAO they produced...

Stanley Hazen, a cardiologist at the Cleveland Clinic and an author of the study, told Nature that understanding how bacteria digest the food we eat could be important for understanding many dietary health effects. “Bacteria make a whole slew of molecules from food, and those molecules can have a huge effect on our metabolic processes,” he said.

Hazen warned against taking products supplemented with L-carnitine, which can be found in energy drinks and body building supplements, saying that benefits were unproven. “I see no reason why anyone needs to take it,” he said.