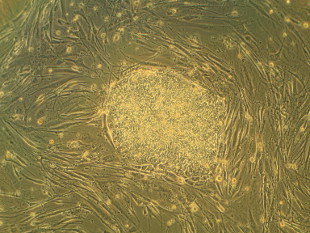 A colony of human embryonic stem cellsWIKIMEDIA COMMONS, RYDDRAGYNEmbryonic stem cells (ESCs) and induced pluripotent stem cells (iPSCs), reprogrammed from adult differentiated cells, reportedly behaved differently from one another in myriad studies. But these functional differences between cell types may not be as drastic as previously thought, according to a team led by Konrad Hochedlinger of Harvard University, which published its findings Monday (October 26) in Nature Biotechnology.

Genetic individuality could explain some differences between human iPSCs and ESCs, the authors proposed. There may be discrepancies when comparing iPSCs from one donor to ESCs from another simply because the individuals have different genetic makeups to start—including whether the cells originated from males or females.

To obtain genetically identical stem cells, the researchers sampled two ESC lines, allowed the cells to differentiate, and then reprogrammed them into iPSCs. This method gave them iPSCs that contained the same genes...

Despite the expression differences, both cell types were equally able to differentiate into a variety of nervous system cells. The researchers also found no difference in the cells’ abilities to separate into the body’s three major cell lineages based on expressed markers. “The two cell types appear functionally indistinguishable based on the assays we used,” Hochedlinger told Science.

“I think it was a very well done study, and it will ease some of the concerns about ESCs cells versus iPSCs,” stem cell biologist Joseph Wu of Stanford University, who wasn’t involved in the study, told Science.

But some researchers still have doubts. “It’s a nice paper, but still there is a little bit of reservation about how broad the conclusion can be,” stem cell biologist Andras Nagy of Mount Sinai Hospital in Toronto told Science.