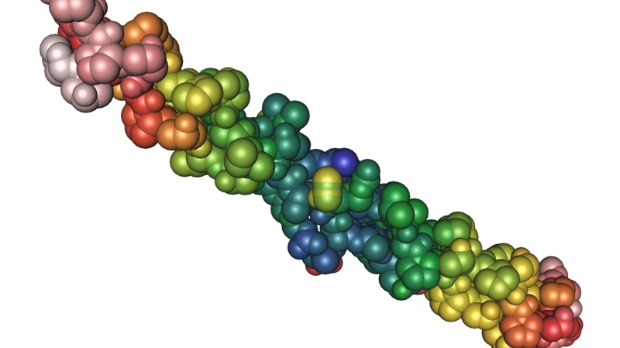 CollagenWIKIMEDIA, NEVIT DILMENResearchers in Sweden and the U.K. have announced that they will begin a stem cell clinical trial in several months to treat brittle bone disease, a rare disorder that causes frequent bone fractures, impaired growth, and even death. The plan is to deliver stem cells that will produce collagen and strengthen bones—half of the babies will receive the therapy in utero, the other half shortly after birth.

One child, now 13, has already received the stem cells and Cecilia Götherström, who is leading the study at Sweden’s Karolinska Institute, said in a press release that the patient is doing well and still growing. Her team’s study will be the first to try the stem cell treatment in the womb. “[W]e believe that we can improve the treatment for other patients by administering it to the foetus and again in repeated doses during the child’s first years...

Dusko Ilic, a stem cell researcher at King’s College London, told BBC News that “any attempt to help the patients suffering this terrible, debilitating disease is more than welcome.” He also pointed out a potential limitation of the study, regarding the fact that people develop different severities. “How will we know whether a milder phenotype [symptoms] in a child that received the treatment is natural or is a result of the treatment?”

Götherström told BBC News that fetuses will receive the first infusion of donor cells at 20 weeks to 34 weeks gestation. The trial is slated to begin in January.