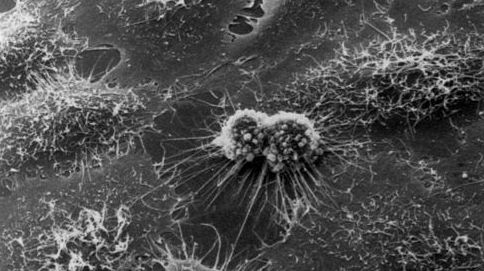 Dividing HeLa cellsWIKIMEDIA, NIHComputational studies published in the last couple of years have posited different major risk factors for cancer, from random mutations in stem cells to environmental carcinogens. Testing these theories in mice, researchers at St. Jude Children’s Research Hospital in Memphis, Tennessee, and the University of Cambridge in the U.K. found that mutations in stem cells do play a significant role, according to a study published yesterday (August 25) in Cell.

“An argument has raged across the scientific community for some years now—some say cancer is ‘bad luck’ because mutations arise by chance in stem cells, while others argue environmental carcinogens are more important,” study coauthor Richard Gilbertson, director of the Cancer Research UK Cancer Center at Cambridge and former director of the St. Jude Comprehensive Cancer Center, said in a statement. “This disagreement has arisen largely from the use of different mathematical models...

In January 2015, a research team at Johns Hopkins University published evidence that stem cell mutations were a leading driver of cancer, finding that the number of stem cell divisions a tissue undergoes in its lifetime can explain some 65 percent of the variation in cancer risk among tissue types. Then, in December, Yusuf Hannun of Stony Brook University in New York and his colleagues found that almost all cases of cancer are due to environmental exposures.

To make sense of the conflicting data, Gilberston and colleagues used a marker molecule called Prom1 to track cell division activity in mice. “By following these Prom1+ cells in all the major organs in mice through their lifetime journey we were able to identify in which organs these cells were actively dividing stem cells,” study coauthor Liqin Zhu of St. Jude said in the statement. The researchers then introduced DNA mutations into these cells. “This approach does away with the need for carcinogens, removing them from the cancer equation and allowing us to test if the generative capacity of stem cells influenced cancer risk,” said Zhu.

In the end, the researchers found that only mutations in actively dividing cells lead to cancer. But they also found that tissue damage “can ‘wake up’ sleeping stem cells, make them divide and massively increase cancer risk,” Gilberston said in the statement. “Therefore, we propose that the origin of cancer lies in a ‘perfect storm’ that includes DNA mutations, stem cell function and tissue damage.”

The team also found that stem cells in newborn mice were far less likely to become cancerous than stem cells in adult animals. “If this biology were to hold true in humans, then it may explain why cancer rates are many-fold lower in children than adults, despite the fact that childhood cancers accrue significant numbers of mutations that alter proteins, and the growth rates of organs peak in childhood,” Zhu said in the statement.