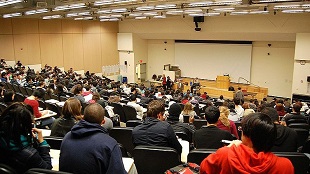 WIKIMEDIA, XBXG32000So-called “active” learning may help students fare better grade-wise than classic lectures, according to a meta-analysis of 225 studies published this week (May 12) in PNAS. A team led by Scott Freeman of the University of Washington found that undergraduate students in science, technology, engineering, and mathematics (STEM) courses  with a lecture-only format were one-and-a-half times more likely to fail than were those in classes involving some form of active learning.

Active learning, while not strictly defined, can include using clickers to gauge student responses, asking students to split into active group workshops, and calling on individuals randomly. Using an active learning approach improved students’ grades by about 6 percent, on average, and could even bump an individual student a full letter grade higher.

“This is a really important article—the impression I get is that it’s almost unethical to be lecturing if you have this data,” Eric...

Others, like former sociology professor Frank Furedi, criticized the study’s approach of splitting classes into lecture-only and those that employed any type of active learning, who called it a “false polarization.”

“Only an idiot would rely entirely on lectures—that hasn’t happened for 200 years,” he told Inside Higher Ed. “The art of teaching is getting that balance between giving the lectures creatively to impart information and organizing more intensive interactive discussions with students, in different formats.”