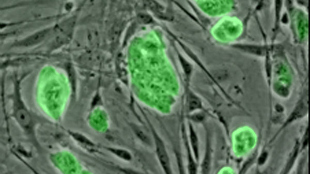 WIKIMEDIA, NSFAlthough embryonic stem cells can form any tissue type in vitro, they have always given researchers trouble when it came to developing a properly organized embryo. Alfonso Martinez-Arias at Cambridge University and colleagues reported in the November issue of Development that if aggregated in the right numbers—roughly 300— embryonic stem cells will begin to arrange themselves in patterns that mimic early embryonic development.

“Much to our surprise, after three days in culture they begin a series [of] movements that resemble those that organize the embryo and acquire coordinates and, as in the embryo, the seeds of the different tissues,” Martinez-Arias told Motherboard in an e-mail.

According to a statement, the researchers could then direct cell fate. “In one of the experiments, for example, activation of a particular signal at the correct time elicits the appearance of the mesoderm, endoderm and ectoderm—the precursors of all cell types—with a...

In a second paper in Development, the researchers used their experimental design to explore the development of the neuromesodermal precursor, which will go on to form the spinal cord.