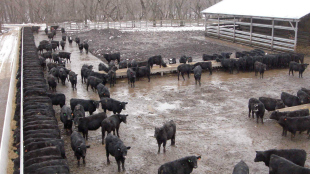 WIKIMEDIA, DEREKBALSLEYAlthough trenbolone acetate is banned for use in humans, cattle in the U.S. are given the steroid to bulk up. Researchers recently tracked the fate of the steroid in laboratory conditions and field sites, finding that it breaks down only partially in response to light, leading to renewal and persistence of the original form. “We're finding a chemical that is broadly utilized, to behave in a way that is different from all our existing regulatory and risk-assessment paradigms,” David Cwiertny, an assistant professor in engineering at the University of Iowa and an author on the recently published Science paper, said in a press release.

Nature and Science referred to the compounds as zombies, although a more apt analogy might be vampires: the steroids partially break down during the day when they are exposed to sunlight, but piece themselves back together at night. That behavior could explain why the steroids are thought to disintegrate more readily into the environment, which perhaps has led to estimates that have undershot their prevalence. “Risk assessments have been built on the basis that light exposure is enough to break down these products,” Laura Vandenberg, an endocrinologist at the University of Massachusetts in Amherst who was not involved in the study, told Nature. “This work undermines that idea completely.”

John Sumpter of Brunel University in Uxbridge, UK, made the point in an interview with Science that the ecological implications of the steroids' persistence are still unclear. “Just becaus a chemical is degraded, don’t assume it won’t come back to haunt you,” he added.