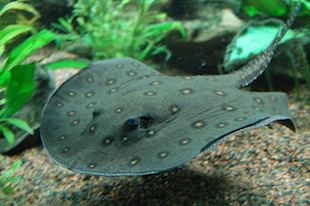 Chewing is usually regarded as a uniquely mammalian trait. But researchers from the University of Toronto and the University of Washington have now added stingrays to the list of animals that can chew, capturing video of the ocellate river stingray (Potamotrygon motoro) as it crushes and tears prey with its jaws. The team published its results in Proceedings of the Royal Society B this week (September 14).

This stingray feeds on insects, which pose a challenge to potential predators because of the preys’ chitinous exoskeletons. Chitin is a tough, pliable substance, most effectively broken down with a tearing motion, which is what chewing allows the stingray to do, study coauthor Matthew Kolmann of University of Toronto told National Geographic’s Not Exactly Rocket Science.

“What I find most interesting is that we have groups of animals that most people would not think have very much...

The team also documented the stingray sweeping its fins upward to create a vacuum that sucks prey toward their mouth. This behavior separates the acts of capturing prey and eating it, which may explain why the stingray was able to adapt its jaws to chewing, the authors reported in their paper.

Chewing is usually defined such to only include mammalian behaviors, but fish employ a second set of jaws located in their throats to grind up their prey, and birds use gizzards for the same purpose. Other animals, such as carp and some lizards, are also gaining recognition for chewing-like behaviors, Kolmann told LiveScience.