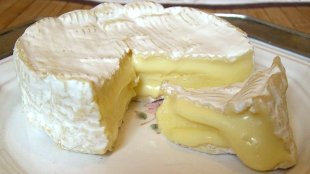 No bellybuttons were harmed in the making of this camembert.WIKIMEDIA, NJGJNow that your Thanksgiving meals have settled, it’s probably safe to hip you to the latest treat on the culinary scene: bellybutton cheese. University of California, Los Angeles postdoc Christina Agapakis and scent researcher/artist Sissel Tolaas have conspired to craft cheeses using microbes harvested from human beings. One cheese was cultured using a sample of microbes from the bellybutton of chef and acclaimed food writer Michael Pollan, and others with bacteria swabbed from Agapakis’s mouth and skin, artist Olafur Eliasson’s tears, curator Hans Ulrich Obrist’s nose, and another scientist’s feet. Quite the collection de fromages, no?

The cheeses are all part of the “Selfmade” exhibit in GROW YOUR OWN, a new exhibition on synthetic biology, at the Science Gallery at Trinity College in Dublin, on display—for smelling but not tasting—until January 14, 2014. “[Visitors] were...

The bacteria and yeasts used in cheesemaking are actually remarkably similar to the microbial assemblages that inhabit the human body, Agapakis explained. Thus the jarringly familiar and human-y smells imparted to some cheese varieties (I’m looking at you, Limburger). “It's no surprise that sometimes cheese odours and body odours are similar,” Agapakis told the magazine Dezeen. “But when we started working together we were surprised by how not only do cheese and smelly body parts like feet share similar odour molecules but also have similar microbial populations.”

Now, the idea of actually consuming cheese made with the help of microbes swabbed from someone else’s stinky bits might be a little stomach-churning. But according to Agapakis, that’s kind of the point of the project. “The idea was to recognize, how do we get grossed out? Then to think about it and move beyond that initial idea of disgust,” she told NPR. "Why are we more uncomfortable with bacteria on the body than we are with bacteria in cheese?"

Editor's Note (December 3): We've added the full name of the Science Gallery exhibition in which the cheeses are featured and included an updated version of the video.