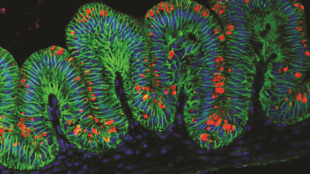 The human stomach is an intricate, layered structure of epithelia, mucosa, and muscle that produces enzymes, acids, and hormones to regulate digestion and appetite. Cultured stomach cells, and even mouse models, are inadequate systems for studying processes of development and disease. A new technique for growing three-dimensional human stomach tissue in vitro, reported last week (October 29) in Nature, may help to overcome this obstacle.

Researchers at Cincinnati Children’s Hospital Medical Center first developed the method using embryonic stem cells, which took about a month to mature into a functional organ with eight different cell types. But a more useful mini-stomach would originate from an adult patient—this type of lab-grown tissue could eventually be used to patch stomach ulcers or tailor individual treatments.

The “gastric organoids” may be particularly useful for studying the pathogenesis of Helicobacter pylori, a bacterium present in most people’s stomachs that can cause ulcers and is associated with stomach cancer.

The miniature organ, however, replicates only the portion of the stomach that connects to the intestine, called the antrum, and is immature—the equivalent of the stomach in a third-trimester fetus. Furthermore, the in vitro tissues are not connected to blood vessels or the immune system, which may limit their applicability to studying infections, Jason Mills, a developmental biologist at Washington University in St. Louis who was not involved in the study, told The Verge.

James Goldenring of Vanderbilt University School of Medicine isn’t sure the organoids will be valuable as ulcer patches: “Our stomachs actually heal really fast and well if they’re allowed to,” Goldenring told The Washington Post. “But that doesn't detract from . . . this type of technology, this idea of building epithelium and using them to repair and fix things. That’s a more general concept, and it’s quite attractive.”