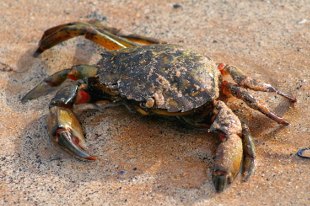 Invertebrates will respond to certain dangerous stimuli by trying to escape, but these animals lack the brain regions associated with the sensation of pain in vertebrates. As a result, some scientists have assumed that invertebrates can’t sense pain in the same way that vertebrates do. Yesterday (November 11), a pair of UK-based researchers published results in Biology Letters that potentially upend this perspective.

In a 2014 Animal Behaviour paper, researchers from Canada and the U.K. offered a set of criteria to determine whether an animal is experiencing pain, including learned avoidance behavior and measurable responses in physiology. Robert Elwood, an animal behavior researcher from Queen’s University Belfast, had previously shown that invertebrates can learn to avoid electrical shocks, but had not linked this observation to the animals’ physiological responses.

Among the electrified crabs, 16 of 20 began walking after being shocked, a potential sign of avoidance behavior. However, 14 control crabs also began walking partway through the experiment. The remaining four crabs that received the shocks also tried to climb out of their tanks or displayed an aggressive posture.

Digging deeper, the researchers measured the lactic acid response in the walking crabs from both groups. They found that the crabs that had been shocked had nearly triple the levels of lactate in their bodies compared to the unshocked crabs, even when controlling for the greater physical activity.

“The data are thus consistent with the idea that shock induces a stressful pain-like state,” Elwood and Adams wrote in their paper. “Importantly, this fulfils a key criterion expected of animals that experience pain.”